One year ago, chapel doors opened up and I saw the man I would spend the rest of my life with. I knew he was the one I was made for, spend the rest of my life with, and serve alongside.  I knew I was made for him and I couldn’t have been more honored or happy. Since that day, I feel as though I’m finally beginning to understand the beauty of marriage and the “one-flesh” bond everyone talks about. You can’t quite explain it, can’t fully comprehend it but there’s a beauty to it. As I’ve experienced marriage and studied Scriptures, I’ve discovered this bond between a husband and a wife was designed by God and it all started in Genesis. 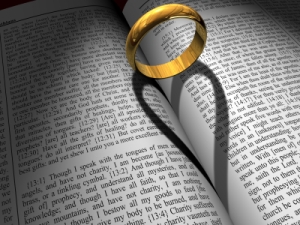 For this reason the Lord God built the side, which he had taken from the man, into a woman, and he brought her to the man. Gen. 2:22

There was man, all alone. He’d named all the creatures on earth but found no one like him, no other being created in the image of God. (v. 20) He had no companion. God knew this wasn’t a good situation and He had a solution planned all along, “I will make a helper suitable (ezer kenegdo) for him.” (v. 18)

So God put Adam into a deep sleep while He worked. God didn’t speak woman into existence as He had done with the rest of creation instead God carefully built the woman with part of the man’s side. Like Penny Howell Jolly (Made In God’s Image?) and Ruth R. Brand (Adam & Eve), some believe that being made from man confirms a woman’s subordination but that relationship shows no subordination, anymore than man is subordinate to the ground he was made from. Both were equal image bearers of God (Gen. 1:26-27) and both were “hand-crafted” by God.

He specially designed Adam with unique skills and traits that would complement his future spouse and the work God had in mind for them both. Eve was also specially designed. She was unique, she was beautiful, and she was made for Adam. They were both made for each other so that, in their differences, they could bring God glory as husband and wife.

Then the man said, “This at last is bone of my bones and flesh of my flesh; she shall be called Woman, because she was taken out of Man.” Gen. 2:23

Eve was unlike anything Adam had ever beheld, so much so that he broke out into poetry. What a beautiful thing that man’s first words in Scripture were about his joy at seeing woman.  Adam exclaimed, “This is at last bone of my bone and flesh of my flesh.” Can you hear the relief and joy in his voice? “At last she is here!”

I don’t know about you but when I go to a wedding and the bride walks in, I always look at the groom to see his reaction. I love to see him catch his breath at the sight of his beautiful bride. He can’t believe he gets the honor of being with her for the rest of their lives. Adam was a groom finally seeing the companion made to be his counterpart and helper. Instantly, he knew she was part of him forever so he said, “She will be called woman because she was made from part of me.” Cleverly, the writer uses a play on words to express this bond.  The use of ish, “man” and ishah, “woman” in the naming recognizes the sameness and difference between the two. They were so different yet so similar because they were one-flesh.

Some feminists have taken man’s naming of woman as another example of subordination which “reduces the woman to the status of an animal.” (Phyllis Trible, God and the Rhetoric of Sexuality)  It’s not meant to be a picture of subordination but a beautiful picture of embrace, equality, and love at first sight. Adam joyfully identified the woman as “part of himself,” she was now his family. He recognized that she was his equal, made in the image of God, and the one to fulfill his need for companionship. Eve was a beautiful gift from God to Adam and their relationship was the beginning of a gift to all humanity.

Therefore a man shall leave his father and his mother and hold fast to his wife, and they shall become one flesh. Gen. 2:24

After Adam welcomed Eve with exhilaration and the strong bond between them was established, verse 24 goes on to show that the bond establishes a lifetime commitment. It not only advocates for monogamous marriages and establishes a pattern for future relationships, but it shows the plan God intended from the very beginning when God made Adam and Eve. Only a union made by God could incur such a universal instinct in men and women.

This universal instinct and plan for marriage not only began in the beginning of Scripture, it’s also in Ephesians 5:28-33. Paul ties back to Gen. 2:24 when he commands husbands to love their wives as their own flesh. Adam saw Eve as part of his own flesh and so should husbands for all time. As one clings to their flesh, loves their flesh, and cannot be separated from it, so should husbands and wives brought together by God. A husband should cling to his wife, love his wife as himself, and never separate from his wife. God established this “one-flesh” union first with Adam and Eve, but it should continue with the rest of humanity.

God shows how men should leave their first family unit and establishes a new one with his wife. God made the man the initiator, the actor and implementer of the marriage plan in Genesis 2:24. Establishing the husband as the leader of his family in Genesis sets the foundation and remains consistent with the whole of Scripture.

When a husband leaves his family and clings to his wife, this leads to the two becoming “one flesh.” They are now a family, tied together for the rest of their lives. Again the passage reemphasizes the “bone of my bone and flesh of my flesh” bond between husband and wife. Anytime something is repeated in Scripture, God is saying “Pay attention to this!” He wants us to understand the serious nature of marriage. It’s not to be entered into lightly because you will become one flesh with the person and they will be your new family. Just as you can never change the DNA, the flesh and blood connection between you and your family, you can never change the “one-flesh” bond between you and your husband. That’s exactly the way God intended marriage to be.  Husband and wives were designed to be one flesh, a new family so “let no man separate them” (Matthew 19:6; Mark 10:9).

God knew from the beginning how He wanted marriage to work so He made Adam and Eve, the first husband and wife, to be the example for the rest of husbands and wives for all time. With divine sovereignty, God lovingly made woman with part of man and created a beautiful bond between them which continues for all generations.  We need to see the beauty of marriage and we need to fight for it.

Since my wedding day a year ago, I’ve come to realize what a gift the bond of marriage is. With it comes great love and joy, but also great challenges. It must be fought for and worked for because God  made it highly important in Scripture from the very beginning. God lovingly gave mankind the ability for companionship, encouragement, help, and most of all love through the bond of marriage. But with that comes a serious commitment and a bond that shouldn’t be entered into lightly. God didn’t just design marriage for our good but also to be a channel for the Gospel to be carried out  and mirror Christ’s relationship with the Church (Eph. 5).

2 thoughts on “The First Marriage: An Unbreakable Bond”