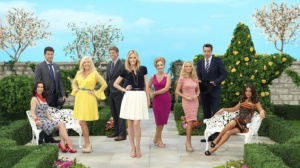 ABC launched a new series to their Sunday evening prime-time line-up that has caused quite a stir among the Christian and Dallas communities alike.  “GCB” was dubbed from “Good Christian Belles” (even though, let’s be honest, we all know “B” does NOT stand for “Belle.”  You’re not fooling anyone, ABC!), and it portrays the life of the rich “Christian” socialites that populate large cities in the Bible belt of the South.

And even though these women all claim high morals on Sunday mornings, lead Sunday School small groups and can quote Scripture relating it to any given circumstance, there’s something morally wanting and extremely sacra religious in each episode.  These women are not nice women; they’re poster-children for adult bullies like Diane described in her article, “Christian Mean Girls.”

So I had to ask myself: what was it about this show that got me so fired up?  It’s clearly a parody about women who claim morality but live very amoral lives, from blatant gossip to sordid affairs to questionable marital relationships.  They’re about convincingly Christian as the Desperate Housewives are of being actual housewives. So, what’s the big problem?

Was it their relationships with their husbands?

When you look at the male personas that belong to each “good Christian belle,” you’ll find about every stereo type under the sun…except the right one.  First, there is Ripp Cockburn, the ego-driven, patristic, dominant male who is the head of his home while his dutiful wife willingly falls under his leadership.  I’m sure to a misunderstanding world, they are a quintessential picture of the biblical paradigm of marriage.  In reality, they fall miles short of the mark.  Ripp does nothing to protect his wife or to lead her; he simply barks orders at her and tags a Proverbs 31 verse at the end.  For more on how this is not a biblical marriage, read Diane’s article, The Myths of Submission.   Then there’s Zack and Sharon Peacham, high school sweethearts, whose love has dwindled.  Zack desires the newest vixen to the neighborhood, while Sharon desires more ice cream.  The only couple that seems the most put together are Cricket, the powerful Politian who manages to balance work and family, and her supportive husband Blake, who seems to have Cricket’s best interest in mind, but in reality, he’s a closeted homosexual whose entire marriage is a sham.

As dysfunctional all of the marital relationships of these women are, it grieves me to realize that this kind of distortion may actually be representative of our Christian marriages.  After all, divorce statistics are consistent across the board, whether you attend a Bible-believing church or not.  However, marriage is important, and the malfunction of the institution should not be something in which we find humor.  It should grieve us, the way it grieves the heart of God.  For more on this, read Gabrielle’s article “Why Marriage Matters.”

Was it their relationships with each other?

As I continued to analyze the reasons why this show irked me so much, I had to wonder if it wasn’t because of the way these women were treating each other.  Here they are, supposedly sisters in Christ, fellow ministers of the Gospel, and they are back-stabbing, spying, ostracizing, and sitting in judgment of one another.  The main character, Amanda, returns to her family’s home after the scandalous death of her thieving husband, and instead of finding arms of comfort and forgiveness she is met with ones of hostility and manipulation.  As women, we need each other, not just for camaraderie but for accountability, support, and wisdom.  For more on why as Christian women, we need one another, read, “5 Friends Every Girl Needs.”  To read more on how we should respond to one another as biblical friends, read these articles, “Tic Before You Talk,” and “Are you a Fair-Weather Friend?”

Another thing that really agitated me was their use (or should I say, misuse) of Scripture.  Over and over again (especially in the first pilot episode) Carlene Cockburn, the ringleader of the pack, used verse after verse to justify her devious actions and get what she wanted.  Most of the passages she used were so overtly out of context, you could tell they were poking fun at a Christian’s use of Scripture to push their own agendas.  There are a few things that really get under my skin, and using God’s Word clearly out of context is definitely high up there on my list (Ask any of my close friends). When I was watching the pilot, there were times when what they were saying was indeed in Scripture, but the passages they were quoting to support it had nothing to do with what they were saying.  There are so many facets to God’s Word.  It is powerful, and sharper than any two edged sword .  It can cut right through the issue to the heart of the problem (Hebrews 4:12, “For the Word of God is living and active, sharper than any two-edged sword, piercing to the division of soul and of spirit, of joints and of marrow, and discerning the thoughts and intentions of the heart.“).  It is our light, our source of truth.  It is a comfort, the tool which God uses to bind our broken hearts (Psalm 119:28).  And, yes, sometimes Scripture is a severing tool, cutting away the callousness sin has caused around our heart.  But Scripture is to be our weapon against the world, the flesh, and the devil…not against each other.  And when we use the Word of God to wound, judge and condemn our brothers and sisters in Christ, we are misusing our greatest resource for unity (Psalm 119:63).

Was it their relationships with their God?

There was something obviously lacking in these women ABC has labeled as “good Christians,” and it goes beyond their hideous actions and malicious ways.  The void is found when you ask the question about their relationship with their God.  Sure, they know His Word, they attend His Church, they teach His people; but do they know Him?  What is their relationship with Him?  This I found no evidence of.

This was, then, the question that struck me the most: what is the difference between those women and the one I look at in the mirror every day?  It has to be more than just outside showmanship, Christian morals, and upright living that separates actual Christians from these women who are falsely playing them on TV.  Which got me to ask the question: would I be as irked if they were acting like actual Christians without any relating to God?  Would it be as offensive if they were actual “good Christian” women who were kind to their wayward neighbor, helpful to their husband and families, supportive of their church’s ministries and yet never once exhibited any real relationship with their Savior?  If the show painted Christianity in a good light, and yet the subject of the Gospel was mute would we, as “good Christians,” be as up in arms?  After all, isn’t our relationship with God, isn’t the Gospel, supposed to be the bedrock of our faith, the very foundation on which everything else is laid?  If it’s left out of the picture, isn’t the entire picture skewed? Or is it just the outside actions that we care about?

There is little difference between a woman like Carlene, the nemesis Christian mean girl on GCB, and a woman who plays the part of a good Christian without ever entering into a real relationship with Christ. “Not everyone who says to me, ‘Lord, Lord,’ will enter the kingdom of heaven. On that day many will say to me, ‘Lord, Lord, did we not prophesy in your name, and cast out demons in your name, and do many mighty works in your name?’  And then will I declare to them, ‘I never knew you; depart from me,” (Matthew 7:21-23).  May we each examine our own lives and take care that we aren’t just another GCB for the world to see; instead may our relationship with Christ “so shine before men that they would see our good works, but glorify our Father who is in Heaven,” (Matthew 5:16).

I don’t know about you, but I don’t want to be a GCB, or even just a GC. I want to be a women who is so in love with her Savior that her relationship with Him is the only possible explanation to her choices.  Don’t you?